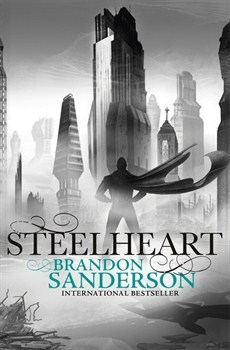 Ten years ago, Calamity came. It was a burst in the sky that gave ordinary men and women extraordinary powers. The awed public started calling them Epics. But Epics are no friend of man. With incredible gifts came the desire to rule. And to rule man you must crush his wills.

Nobody fights the Epics…nobody but the Reckoners. A shadowy group of ordinary humans, they spend their lives studying Epics, finding their weaknesses, and then assassinating them.

And David wants in. He wants Steelheart – the Epic who is said to be invincible. The Epic who killed David’s father. For years, like the Reckoners, David’s been studying, and planning – and he has something they need. Not an object, but an experience.

If you haven’t read this book yet, go read it NOW. The synopsis is the most you could get without being spoiled, so don’t read  beyond the ‘spoiler line’. All I have to say is that this book is EPIC. I’ve read two contemporary in a row and I really need some action stuff, so I picked up Steelheart, (featuring superheroes (or more accurately, supervillans), explosions, rifles and rebellions) Great choice, and it might be the best book I’ve read in 2014. (it’s a mix of my three fav genres too!)
— spoiler line —
Characters
Let’s talk about David. I really admire how he can improvise during missions. He never gives up, and is determined to finish whatever job he has. He did a lot of research, and is being called ‘nerd’ by Megan (I love those scenes). But who can bring down the evil without some researching and planning? David is a badass nerd. Oh! and his metaphors. They’re pretty awesome 😀
The Reckoners
I’ve guessed that Prof is an epic before he apologises to David about his temper. I also guessed that it’s an inner quality, not an object, that makes Steelheart vulnerable. However, the fact that Megan is Firefight took me by surprise. Obviously it’s kind of suspicious – she can’t use the tensor properly and the harmsway doesn’t really work on her, but an epic? Working for Steelheart? Never thought of that.
Abraham is a really wise man.

No. You are letting Steelheart live your life for you. He controls it, each step of the way. Live your own life.

Cody is funny, but sometimes I found him quite annoying. As for Tia, the hacker, she is AWESOME. She knows medic, computer and is basically the brain of the Reckoners.
Power

The evil Epics kind of represent those corrupted governments in real life. They rule by fear, not justice, and because of fear, citizens bow down to authorities. No matter how corrupted they are, nobody challenged them. Well, except the Reckoners and David (and maybe some other few). Power alone is not evil, nor good. It’s up to the one with it, how he/she uses it. But once we have power, we tends to corrupt. Greed is human’s weakness.
Fear
Fear is the thing that makes Steelheart invincible. Just like a challenge or a dream. Fear makes them invincible, cannot be defeated or reached. The fear of failure or doubt block our way. And we have to fight them. Just like how David’s father fight Steelheart. No, not our competitors who are our biggest enemy. It is fear.

Where there are villains, there will be heroes. Just wait. They will come.

Don’t wait for them. Be a hero yourself. You don’t need to save the world to be a hero. You don’t need a cape. Conquer your fear, and fight for your beliefs. Fight for justice. Fight for your dreams.
Favourite quotes:
“You’ve got passion to kill but you need to find passion to live.”
“No. You are letting Steelheart live your life for you. He controls it, each step of the way. Live your own life.”
“Sometimes, son, you have to help the heroes along.”
∞ ϟ 9¾ ♔ ⚯͛ △⃒⃘ ➵ ♆
I CAN’T WAIT FOR FIREFIGHT. It’s coming out soon though, the release date is Jan 2015. (honestly, I need it RIGHT NOW)
I really want to read more Brandon Sanderson’s books – the Mistborn trilogy etc. (I’ve heard a lot of people raving about them)
So what do you think of Steelheart? Do you like it? Or not?